When people meet me I think they forget that there was once a time when I had never used a sling.

“You make it look so easy”

is something I hear every week.  Of course I do – this is my job and my passion.  But there was a time when I was pregnant and looked at slings online and was confused.  And there was a time when I was carrying my infant son and struggling with it.  This is the story of my sling (and parenting) journey, and specifically my first woven wrap.
*Please note that a small part of the story touches on child/baby loss.*

I had vaguely heard about baby wearing (what a weird term I thought) when I was pregnant in 2008, and decided I definitely needed to get some sort of carrier.  I googled and browsed and researched.  I liked the idea of a woven wrap, but they were expensive, and had a learning curve, and what if I couldn’t get to grips with it?

I went to the local NCT Nearly New Sale a month before my due date, and Oh Joy!  I picked up a bargain – a Baby Bjorn in perfect condition and only a fiver!  It wasn’t a wrap, but it was a reputable brand, they must be popular for a reason!

On 6th October 2008 my beautiful boy was born in a peaceful water birth in hospital.  It took us a few days to get breastfeeding established, and I treasure memories of walking around the ward with him in the Baby Bjorn, so glad I packed it in the hospital bag.  But gosh, he was heavy!   He was born 8lb 9oz.  And apart from the temporary blip while we mastered nursing he headed right to the top of the percentiles and stayed there.

By 4 months old, around 18lbs, he was too physically big for the BB, and much too heavy.  It hurt between my shoulders and wouldn’t do up around his thighs.  I hated it.  But I loved it, I loved carrying him.  And although he was generally a happy and contented baby he would cry in the buggy, he seemed so far away and wanted to be held.   There had to be something more – I knew people carried toddlers, how could I be defeated with a 4 month old!  So I began my internet searches again.  And I walked up to a stranger in Boots carrying a baby in  bright stripes and asked about her sling.  (Much later I found out it was Claire A, who a year or so later founded the Exeter Sling Library.  I like to think I was one of her first clients.  So it came very much come full circle when I took over the library in 2013). I bit my tongue, and crossed my fingers, and bought a Didymos woven wrap on eBay.  A Ruby-mandarine Ellipsen size 6 for £55.  It wasn’t my first choice of colour or design but I liked it, and it was a bit of a bargain as they were over £80 new at the time.

My first EVER wrap job was way too loose and low, but you can see we loved it!

It arrived, already broken in.  Soft as butter, thin but snuggly.  Delicious.  And nearly-twenty-pounds Charlie was suddenly weightless.  That sling became my pride and joy.  I coveted more, and over the next year or so bought a shortie (Storchenwiege inka size 2), an Ergo, a meh dai, another Didy, and a ring sling.  But wrapping was my true love, though I didn’t know anyone in real life who wrapped and didn’t (then) master back carrying with a wrap, favouring the meh dai or buckles for a back carry.

By the time Charlie was 18 months old he was a busy toddler and I had found the ring sling love.  I still used my beloved didy, but rarely.  Then my online friend Katy had some bad news.  She was due with baby #2 in July, and in June her husband was told he was under threat of redundancy and his hours would be cut to 3 days a week.  Our community of friends rallied, setting her up with some cloth so she didn’t need to worry about nappies, and I sent my didy on holiday to her so she wouldn’t need to buy a double buggy.  On 15th July 2010 her son (also Charlie) was born, and the didy did its job well, and snuggled him with love.

In late October her whole family caught colds, and Charlie was poorly, with a persistent low grade fever.  But something just wasn’t right.  After several days he took a sudden turn for the worse, refusing to nurse, and they took him to casualty.  They heard words every parent dreads– meningitis…coma…life support.  Charlie died when he was only three and a half months old.  Katy and her family started a meningitis awareness campaign in his memory, and his story has touched many – small but mighty, never forgotten.  (Please read his story here: http://charliecheekychops.blogspot.co.uk/ )  And my didy came home, washed and loved, and I cried into it for my friend’s broken heart.

Meanwhile I had a busy 2 year old, and a heart that longed for more babies, and a body that was less cooperative.  I stopped browsing slings and torturing myself with thoughts of babies and baby wearing, and focussed on my toddler as he grew to a preschooler.  My very good friend Mary was pregnant, and as well as a gift of a ring sling (a Comfy Joey charity fundraiser with the profits going to Meningitis Trust – a cause also close to her heart as she lost her best friend to meningitis at 14) I lent her my didy, and it wrapped again when her daughter was born in June 2011.

And I weaned my son, in hopes of a pregnancy that would not come.  And I put away the slings as he turned 3 and walked everywhere.  And maybe I cried a little in fear that I would never nurse or baby wear again.

At last, in March 2012 I got a positive pregnancy test.  And started looking again at slings.  And was bewildered.  The sling world had changed so much.  It seemed that there were very many more woven wrap companies, more carrier brands, more sling libraries, facebook groups,  and many more resources.   I grew my baby, and I read and coveted, and purchased and planned and stashed, happy to buy several wraps in preparation for my desperately wanted baby.

But there was never any doubt which sling would be the first.  Snuggly soft and warm for my November baby, Ella.  I wrapped her first at 18 hours old when I took her to the hospital for her newborn checks.

For a long time I thought I would keep the Didy as a legacy.  But although it was the most loved wrap in my stash, more heart (and not just mine) in it than any other, it was one of the least reached for.  My fickle tastes always reaching for the blue stars, or the other blue stars, or the, ahem, blue stars or the teal stars (sense a theme?!), or once in a while the rainbow!  I knew I needed to find a way to spread the love this wrap held, not keep it folded or braided at the bottom of a pile, a dusty relic.

The last weeks I had it I wore nothing else.  I nearly backed out – what was I thinking!  This was such a beautiful sling, so soft and gorgeous, and it might not be blue and starry, but it was red and ellipseny and oh, what was I thinking.  My friend took some gorgeous pictures of myself and Ella.  And then I packed it up and posted it away and tried not to cry. 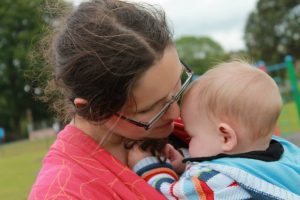 Ella and I enjoying the last snuggles in our first sling.

When I saw the work Geeky Baby had done for me I was so happy, I knew I had made the right decision.  On Charlie’s third birthday, which his family celebrate every year, they unwrapped a parcel from me.  Inside was a scarf, for Charlie’s big brother and little sister to carry their toys, or for Katy to wear next to her heart.  I have one for myself and my babies too, a piece of that sling will always be mine.  The other half of the wrap was made into a ring sling, appliquéd with the yellow feather that was then the Meningitis Trust logo.  I donated it to South Cheshire Sling Library, Katy’s local library, in Charlie’s memory, and I like to think of every baby snuggled in it, enabling more parents to baby wear and also, I hope, hearing Charlie’s story and raising meningitis awareness.

I met Katy for the first time in real life in late July of that year.  We’d known each other over 4 years online and it felt like we’d met a thousand times before.  She was wearing Emily in the library sling, and our group of friends all used it. 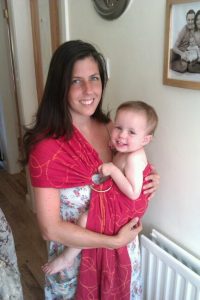 Meanwhile, things were changing in my life and in August 2013, when Charlie was nearly 5 and Ella 9 months I became a single Mum.  That month I attended a School of Babywearing peer supporter course held in Barnstaple, just because I loved my slings.  At the time I did it purely for my own edification; however a few weeks later I found out that the lady running Exeter Sling Library was giving up.  And suddenly, in a time of turmoil for me it seemed that the stars had aligned – and I found myself running a sling library!

Until the day I did the peer supporter course I had never used a stretchy wrap.  Until I took over the library I had never used any buckles carriers except an Ergo.  The early months of the library were a scary time for me, with a massive learning curve and I haven’t forgotten what its like to cradle my fragile little person and be scared I might break them.  Slings have made my life as a parent infinitely richer – but more importantly they just helped me cope day to day, through good times and bad.  I am honoured every time I help a family to use a sling to make their life that much easier.   And I still learn new things from every family I meet.